a highly diverse group of
plant-like organisms that grow in water. 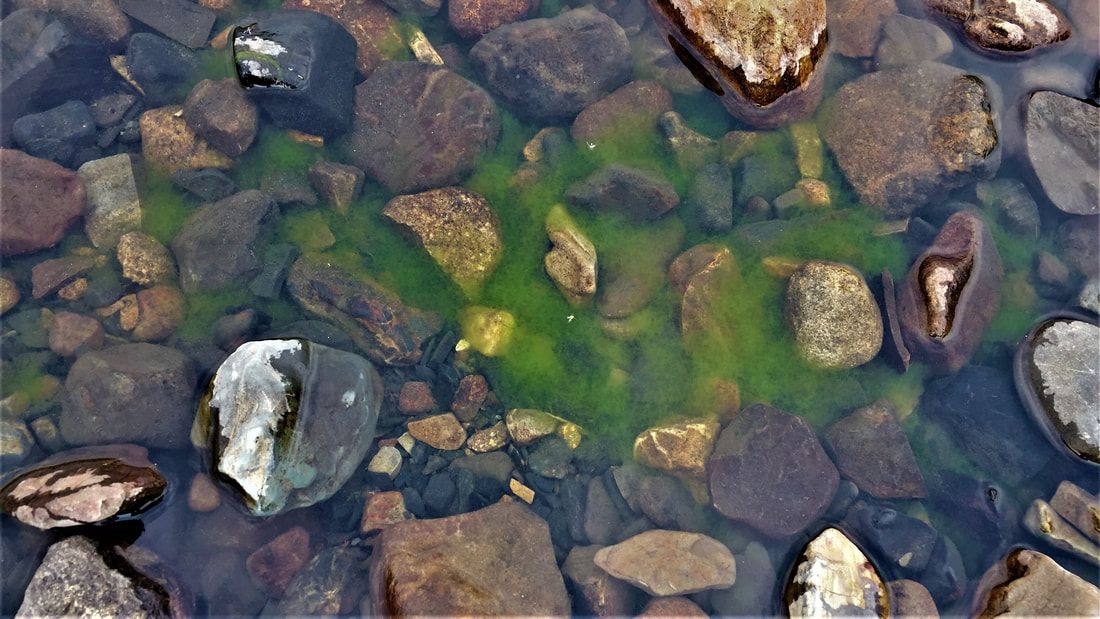 Algae is a term used to refer to a highly diverse group of plants that grow in water. Freshwater algae come in a variety of shapes, sizes, and colors, and are an essential component of all freshwater ecosystems.

In most of the rivers and streams throughout the Upper Gunnison Watershed, algae can be seen growing on rocks, logs, and other underwater surfaces.  If you were to visit a particular fishing spot or boat ramp consistently, you might notice that the algae population varies week-to-week, month-to-month, and even year-to-year.

DO OUR STREAMS HAVE TOO MUCH ALGAE?

The most effective way to use that data to implement beneficial management practices is also an emerging subject.

For more about algae in our rivers look for CCWC’s upcoming Washington Gulch Watershed Plan, expected to be completed in Spring 2021.

The observable increasing and decreasing of algae populations is a result of many different influences. The following factors can heavily impact algal growth:
Vegetation Coverage
Algae, like other plants, need light to survive. Shade can play a major role in algae production since it limits algal growth. The amount of shade over a stream depends on many factors such as elevation, stream size, native vegetation type, and vegetation health. A stream surrounded by degraded vegetation or no vegetation could be expected to see a rise in algal growth due to increased access to sunlight.
You may be an angler, or know one, who looks for slippery reaches to fish in. Such thinking is well-founded, as a slippery reach could suggest that numerous fish are eating bugs rapidly, preventing the bugs from consuming algae and, therefore, making the stream slippery.

Water Management Practices
The way water is managed by humans affects flow rates which can heavily impact algae growth. Man-made alterations like diversions and dams can have a particularly noticeable effect. If stream flow is reduced due to a diversion, algal growth immediately downstream may increase. If a flow is reduced to zero, the algal community could be killed in that stretch of river.
All of the factors described above control algae growth and distribution simultaneously and to varying degrees. Determining which factors are most heavily influencing algal growth at any one time in any one location can be challenging, to say the least.